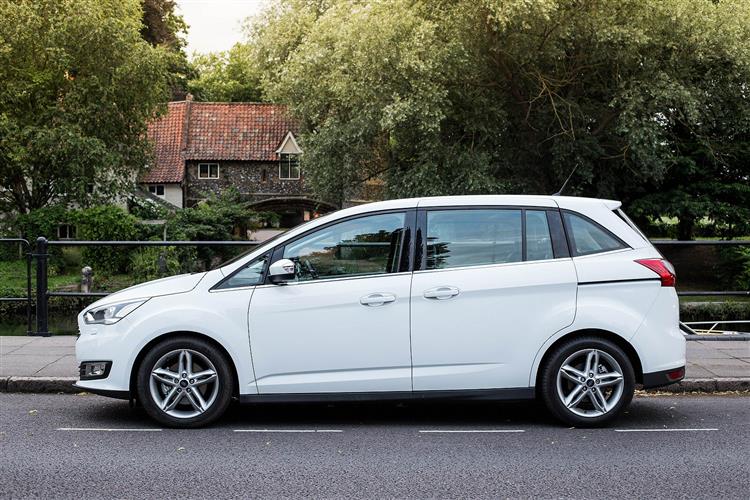 The Ford Grand C-MAX seven-seat compact MPV has been spruced up with sharper styling, more efficient engines and a whole host of clever technological highlights. The 1.5-litre diesel engine is sure to vanish out of showrooms fast, so you might need to move quickly there. What other options are there for those who relish a decent drive and need seven-seat practicality?

There aren't that many cars that you could confidently buy without driving them first. Even some revered model ranges have had their clunkers. The 115PS Golf GTI Mk IV was a dog. The BMW 518i is best forgotten. Even the iconic Porsche 911 took a long time to come back from the shoddy engineering and cut-price interior of the 996-generation car. Try thinking of one model line where you could confidently recommend every single car. Maybe the Mazda MX-5. There's a case for the Lexus LS. Add to that the Ford Grand C-MAX. No, it's not a blindingly obvious choice, but just think about that one for a moment. Has there been a weak one offered? If you want a seven-seat MPV but don't need something that is best operated with an HGV licence, the Grand C-MAX answers the call and does so with a blend of qualities that puts it beyond the usual mass-market MPV mediocrity. This heavily-updated third generation model ups the ante once again.

If asked what sort of MPV we'd recommend, we'd normally ask "do you like driving?" and if the answer came back positive, the answer has tended to be a Ford C-MAX - or the 7-seat 'Grand' version if you need the extra space. It seems simple but that right there is the big draw card of the Grand C-MAX. It's a car that operates in the distress purchase sector of the market, where it's needed rather than wanted, but still manages to bring an element of surprise and delight. The sheer joy of realising that MPV ownership needn't be boring is something to behold. This time round with this improved MK1 model, Ford has paid particular attention to improving refinement. Noise, vibration and harshness have been improved through the use of thicker side glass and more absorbent seals around the tailgate and rear view mirror. The engine bay heat shield has been filled with acoustic damping material to reduce powertrain noise and diesel cars are equipped with extra acoustic seals to further reduce noise intrusion. A retuned dual mass flywheel helps to reduce shaking forces when the engine is under load, while revised engine mounts offer improved refinement during Auto-Start-Stop operation. The star of the engine line-up is the 120PS 1.5-litre TDCi diesel engine, seen for the first time in the C-MAX, replacing the old 1.6-litre unit. Power goes up by five per cent while emissions drop by six points. There are also the multi-award winning 1.0-litre EcoBoost petrol engines, offered once again in 100 and 125PS outputs. The big banger in the range is a revised 2.0-litre diesel.

If there's one criticism you could make of the Grand C-MAX, it's that Ford hasn't exactly been adventurous with the restyle. In fact, it'll pass unnoticed by many. The front end looks a bit more chiselled, with an inverted trapezoidal grille, and the screen washer jets have been secreted beneath a cowling to give a cleaner look. The tailgate has been given a smoother and more sophisticated one-piece appearance. The interior has been tidied up quite considerably, Ford moving away from its 'more buttons are better' school of interior design. There are now a good deal fewer controls and switches, while the new black satin trim and chrome detailing contributes to a cleaner look. Functions are simpler to use, such as the air-conditioning controls that now feature buttons that are easier to recognise and distinguish from each other. Practicality improves too, with a redesigned centre storage console. As before, there's a clever 2+3+2 seating layout and luggage space ranges from risible with all seven seats in place to up to 750+ litres in a five-seat layout. Fold all the seats down and there's over 1,700-litres to play with.

In a bid to spike the guns of the Koreans, Ford has built a heck of a lot of value into the latest Grand C-MAX. The last model also had a lot of smart tech features and Ford rightly left most of them on the options list, giving customers the choice of whether they wanted to pay extra or not for these nice-to-haves. You can now get one of those tailgate openers which operate when you wave your foot under the bumper. These have always struck us as an odd fit, because if you're so laden down that you can't open the boot, are you really going to stand there doing one-legged manoeuvres? Anyway, there's also a perpendicular parking system and Active City Stop collision avoidance that operates at up to 31mph. Ford's latest Sync2 voice-activated connectivity system is also on offer, delivering smartphone sync and the chance to control some of the car's minor functions by voice command. The clearer eight-inch colour touchscreen is a welcome addition. Ford also bring us MyKey technology, which lets parents set a top speed and limit stereo volume in advance to prevent the young 'uns getting a bit overexcited. There are also LED Daytime Running Lights, Bi-Xenon HID headlamps and Ford's Adaptive Front Lighting System that adjusts the headlight beam angle to one of seven settings depending on traffic and road conditions.

Ford clearly couldn't target a car to those with growing families if it didn't make all the right numbers on the monthly balance sheet and the Grand C-MAX certainly scores well in this regard. Most will be drawn straight to the diesel engines, attracted to the torque and the fact that they'll pay back when some miles are put on the clock. Sound policy too, but if you need a Grand C-MAX as a school run and shopping vehicle, you'd actually be better advised going for one of the economical 1.0-litre petrol models as they're priced so cheaply it'd be a more cost-effective purchase. Really leverage the economy benefits of the diesel engine though and you'll save big. The 1.5-litre TDCI diesel returns a combined fuel economy figure of better than 65mpg, which is excellent for a car of this size and with this much torque. Go for the 2.0-litre and it will also get around 60mpg.