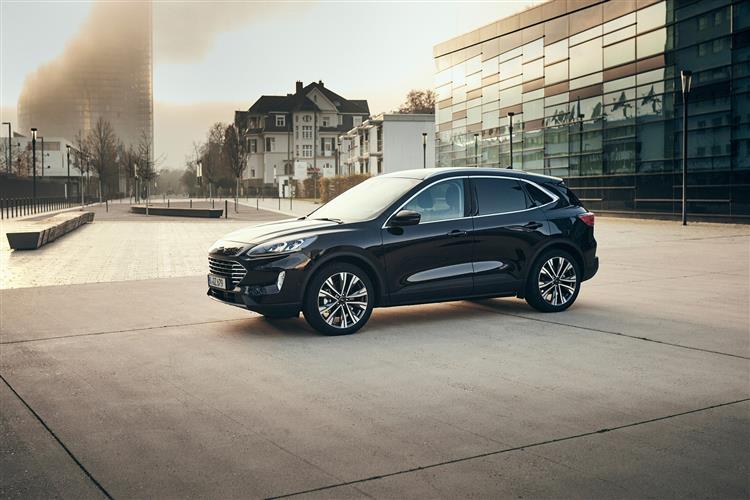 Hybrids are nothing new. In fact, introducing a self-charging variant into a range that already has a plug-in PHEV version available might be seen as backward step. Yet Ford seem keen to extol the virtues of the Kuga Hybrid model we look at here, giving the Kuga range the widest variety of electrified powertrains of any model line-up offered by the company. So, how does this self-charging Kuga stack up? And does it bring anything new to the sector?

Now in its third generation, the Kuga first saw the roads in 2008 and was an immediate hit with keen drivers looking for the practicality of an SUV. The current third generation model, launched in late 2019, has expanded its remit to include not only petrol and diesel engines, but also mild-hybrid tech. There's also full-Hybrid technology in both self-charging and Plug-in hybrid forms. It's the self-charging Hybrid Kuga we look at here, which, as with other Prius-like full-Hybrid models, brings the benefits of a part-electric drivetrain without having to worry about external chargers. This, Ford thinks, will be a more palatable step towards EV motoring for many SUV drivers, people not quite ready for the hassle of plugging in with either a PHEV model or a full-EV.

This self-charging full-Hybrid Kuga model is only available with the combination of a 2.5-litre Atkinson cycle petrol engine assisted by an electric motor, this confection delivering a combined output of 200PS. The motor is powered by a tiny 1.1kWh liquid cooled battery, which is replenished by both the engine and the energy recovered under braking. The car will sprint to 62mph from rest in an acceptable 9.1 seconds in what Ford describes as a "smooth and linear response to acceleration", partly in thanks to its power-split auto gearbox. Simulating gear-shift functions, this transmission is designed to adjust the ratios for optimum performance and fuel efficiency and will adjust the engine's rpm as the speed changes to reduce the "rubber band" effect commonly associated with CVT transmissions. This simulated gearshift function is available in 'Normal' and 'Sport' driving modes, and, according to the car's chief programme engineer, Glen Goold, gives a "more engaging drive with the familiarity of traditional 'cog swaps', plus the added benefit of limiting engine noise." On the subject of noise, the car also features a 'Silent Key Start' feature, enabling it to pull away from standstill in pure electric mode, which is ideal for those early morning starts, or in the cut and thrust of stop-start driving. This Kuga Hybrid is available with the choice of either front-wheel drive or Ford's 'Intelligent All-Wheel Drive' set-up. In normal running, this AWD system will disconnect power being sent to the rear in order to increase fuel efficiency. Sensors detect any wheel slip, and will divert the required power to the ones with the most grip, even up to 100% to the rear if needed.

There are few visual clues to this Ford's Hybrid powerplant, so the look is as with any other Kuga variant. This MK3 Kuga design follows the brand's current design language with the familiar style of grille opening at the front, flanked by swept back LED headlamps. The Hybrid is only available in sportier 'ST Line Edition', 'ST Line X Edition' and luxurious 'Vignale' trim levels, so the wheel arch extensions are finished in body-colour, giving a slightly more cohesive look. Neatly integrated roof rails add an extra layer of practicality to the outside, and the two sportier trim levels give a flash of red paint on the brake calipers shrouded behind their respective alloy wheels. The 'Vignale' counters with some exterior chrome embellishment lending a whiff of luxury. The interior continues a family theme with Ford's 8-inch 'SYNC3' infotainment screen mounted centrally to the upper dashboard, complementing the 12.3-inch digital instrument cluster. A nice addition is the neatly integrated premium B&O sound system. The 'ST Line Edition' and 'ST Line X Edition' both feature a more sporting style inside with contrasting materials and stitching to the seats, whilst the 'Vignale' gets the addition of a head-up display on the top of the dashboard, and full leather seats as befits the range-topping model. The liquid cooling system for the batteries allows them to be packaged much closer together, and therefore they don't intrude into the capacious interior that still allows seating for five. Luggage space in the rear is ample at 526-litres, but can be extended to 1,481-litres with the rear seats folded.

Depending on trim level, prices start from around £33,000 and rise towards £38,000, but as is often the case with Ford, the equipment level is high allowing good value for money in the sector. Even the 'ST Line Edition' for instance, comes with equipment such as 'SYNC3' infotainment, a B&O audio system and a digital instrument display as standard. There is also the kind of glut of safety systems one would expect to find, such as the optional 'Lane-Keeping System with Blind Spot Assist' which makes its debut on the Kuga, as does the option of 'Intersection Assist' which can monitor for potential collisions with on-coming vehicles in parallel lanes. The Hybrid variant is competing in a hotly contested market and even though the Kuga is a well-established player, the alternatives can't be overlooked. The two most obvious self-charging similarly sized Hybrid rivals are the Toyota RAV4 and the Honda CR-V. Other contenders with 'hybrid' badging tend to be rather different; either 'mild hybrids' (like versions of Kia's Sportage and Hyundai's Tucson). Or PHEV plug-ins (like Hybrid versions of the Volkswagen Tiguan, the Peugeot 3008, the Citroen C5 Aircross and the Vauxhall Grandland X). Ford has both mild hybrid and PHEV options elsewhere in the Kuga range to combat competitors like these. In short, make sure you know what you're buying.

Ford are suggesting that a total range of nearly 600 miles could be possible before needing to refuel in this Kuga Hybrid. This is based upon a WLTP figure of 48.7 mpg combined, and of course, the batteries don't require you to plug in anywhere to recharge. The front wheel drive version is rated at 130g/km for CO2 emissions. Disappointingly, Ford only offer a 3 year/60,000 mile warranty as standard, which seems a little way short considering the offerings from Kia and Hyundai. Of course, the counter to that is the reach of Ford and its dealer network, and the fact that they offer strong finance packages, affordable servicing plans and also own brand insurance. All of this helps with maintaining the whole-life costs of the car, although the populist Ford badge does take its toll on residuals.