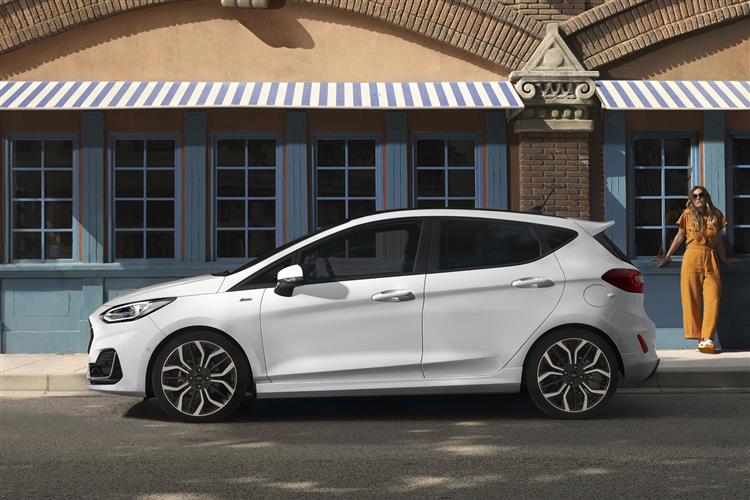 Not quite ready to go all-out electric but need greater efficiency in your next supermini? Then Ford has a proposition for you in the shape of this much revised Fiesta EcoBoost mHEV mild hybrid model. The brand's mild hybrid tech gives you some of the benefits of electrification without the priciest parts of this technology.

Electrification is everywhere in the market at present but there's not much evidence of that in the supermini segment. Not at prices the average person can afford anyway. If your budget can shoulder premium pricing, Toyota will sell you a full-Hybrid Yaris, Renault will now do the same with their Clio and Peugeot and Vauxhall have full-electric versions of their 208 and Corsa models. But not everyone can stretch to cars like these. Ford says it can offer a more sensible solution and this is it, the Fiesta EcoBoost Hybrid. This model adds mild hybrid tech to the company's usual 1.0-litre EcoBoost three cylinder petrol engine to create a small but significant improvement in efficiency. And, at the same time, a perkier feel through the gears. All at very little increase in price over conventional levels. Sounds promising. Especially when all of this is combined with the useful packages of design changes which have created the revised version of this seventh generation Fiesta.

Apart from the badgework, there are no real visual changes to distinguish this mild hybrid Fiesta variant apart from its conventional range stablemates. But you might well note the changes made to this improved version of the seventh generation design. As before, it's offered in both three and five-door bodystyles, plus an 'Active' crossover variant, and all derivatives are tidy pieces of styling. The bonnet's been revised, the nose of the car raised and the brand badge moved into the grille, which is flanked by restyled LED headlamps. As before, the sportier 'ST-Line' models get a more aggressive front bumper and feature a gloss black honeycomb mesh grille. The Fiesta Active is marked out by vertical grille bars, plastic body cladding and silver trim accents. At the rear with all variants, the tail lamps are darker and Ford now offers a contrasting matte and gloss black diffuser finish. Inside, Ford has added a 12.3-inch configurable digital instrument display screen, which complements the usual 8-inch SYNC 3 centre infotainment screen. It incorporates 'Apple CarPlay' and 'Android Auto' smartphone-mirroring - and can include a 575-watt B&O stereo and a rear view camera too. Storage for personal belongings is delivered with a 20% larger glovebox and a 1-litre media bin in the centre console. Rear seat passengers aren't as cramped in the back of a Fiesta as they used to be; changes made in 2020 added 16mm more knee room, supported by slim-back seats that offer decent side-to-side support. This Fiesta's tailgate is wide for easy access to the 311-litre boot. If you're able to flatten the 60:40 split-folding rear backrest, you'll find that the revealed cargo floor ends up with quite a step in it, but the total capacity figure looks reasonable by segment standards - 1,093-litres.

Think in terms of a price point starting from around £18,500 for the Fiesta EcoBoost 125PS mHEV; that's with base 'Trend'-spec trim. 'Titanium', 'Active' and 'ST-Line' trim levels are also available (with plusher 'Vignale' versions of each) and with these, you also have the option of a perkier 155PS version of this engine. Prices range right up to around £24,000. Avoid base trim and with the 125PS unit, you'll be offered the £1,500 option of Ford's 7-speed PowerShift auto transmission too. We'd be tempted by the crossover-style 'Active' model with its slightly raised ride height, SUV styling cues and 'slippery' road drive modes. Key additions added to the options list of this revised Fiesta design include Matrix headlights, which block individual light rays to avoid blinding oncoming cars when high-beam is enabled. These headlamps can also adapt to bad weather and surrounding traffic. Safety-wise, an extra addition is 'Wrong Way Alert', which stops you turning into a road where you'll be driving against the traffic. As usual on a Fiesta, you'll be offered some up-scale equipment options, examples including an openable panoramic glass roof. There's sophisticated safety too, including a Pedestrian Detection system that can even prevent collisions at night. And 'Active Park Assist' with brake interventions to prevent low-speed collisions when parking hands-free. As for standard equipment, even base models get features like air conditioning, Bluetooth, an 'Emergency Assistance' system and a 6-speaker stereo.

We've explained how the mHEV system works in our 'Driving Experience' section but we'll further add here that the belt-driven integrated starter/generator is also able to aid the powerplant's stop/start system in urban traffic, restarting the engine in approximately 300 milliseconds - about the same as the blink of an eye. And the 'BISG' also enables the Fiesta EcoBoost Hybrid's Auto Start-Stop technology to operate in a wider range of scenarios for even greater fuel savings, including when coasting to a stop below 10mph - and even when the vehicle is in gear with the clutch pedal depressed. Thanks to all of this, the subsequent reduction in the amount of work required from the petrol engine results, says Ford, in a fuel efficiency improvement of up to 9%. So what does that equate to in terms of stats? Well, let's base this around the Fiesta EcoBoost Hybrid variant most will choose, the 125PS mHEV 1.0-litre EcoBoost Hybrid manual gearbox variant. This returns up to 56.5mpg on the WLTP combined cycle and up to 113g/km of WLTP-rated CO2. For the 155PS version of this unit, the respective figures are up to 56.5mpg and up to 114g/km. You'll need some perspective here; the non-mHEV 1.0 EcoBoost Fiesta manages bests of 53.3mpg and 121g/km.