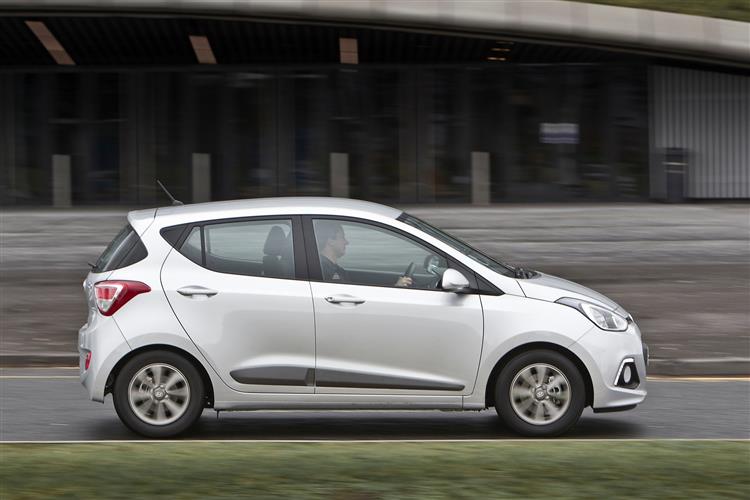 Hyundai is looking for its i10 city car to step up from being merely branded good value for money to being considered best in class - or thereabouts. With smart styling, plenty of pace inside, strong equipment levels and a focus on refinement, it's in with a genuine shot.

Sometimes, the stars just align perfectly for a car manufacturer. Such was the case back in 2009 when two largely unrelated circumstances coincided. The introduction of the government's Scrappage Scheme saw a number of tired old cars being taken off our roads and resulted in a commensurate quantity of buyers with a modest sum of cash in their hands looking for something to buy. Fairly new onto the market and having just replaced the underwhelming Amica was the rather appealing Hyundai i10. Sales skyrocketed and for a while, the i10 was the country's best selling car. It didn't last. While i10 sales continued quite strongly, the end of the Scrappage Scheme saw buyers return to their usual buying habits. Since then, Hyundai has tried hard to keep citycar buyers interested. It updated the engine choice in that MK1 model and facelifted the car a little in 2010, even resisting the temptation to significantly increase its bargain basement pricing. By the end of 2013 though, with over five years being a fairly decent innings for a car in this class, it was time for something fresh. Step forward the second generation i10. It arrives to find that competition in the citycar sector has become much stronger in the last few years, with this Hyundai now having to contend with cars of the quality of the Volkswagen up!, Skoda Citigo and SEAT Mii triplets. In other words it'll have to be excellent to even get a look in.

Hyundai didn't go big on choice when the first i10 was launched. Everyone got a 67PS 1.1-litre petrol engine and that was their lot. That engine was subsequently upgraded to a 1.2-litre powerplant and it's this unit that carries over into the latest car, albeit mildly tweaked to offer better efficiency numbers and now developing 87PS, good for 62mph in 12.3s on the way to 106mph. Customers are also offered a 66PS 1.0-litre engine at the entry level which makes 62mph in 14.9s on the way to 96mph. Hyundai are probably keeping their fingers crossed for 'Scrappage Scheme: The Sequel' because the 1.0-litre car could well be a big beneficiary. There's still no diesel engine offered and it's probably a sound decision. Buyers of this type of car rarely rack up enough miles to make the incremental cost of buying a diesel work out versus the savings they'd see in fuel bills. The latest model has targeted improving refinement as a key priority. The suspension has been given a thorough working over to improve ride quality and reduce noise. The longer wheelbase and better quality relocated dampers will help here, improving body control over road imperfections.

The key difference between this car and its predecessor is that whereas the old design was a model created largely for emerging markets and was built in India, the latest car is a little more tailored to European tastes. As with 95 per cent of Hyundai cars sold in Europe, this i10 has been designed and developed at the Hyundai Motor Europe Technical Centre in R??sselsheim, Germany, and is built at Hyundai's factory in Izmit, Turkey. Understanding this is key to figuring out why Hyundai is doing so well across our continent. With the i10 now on stream, over 90 per cent of Hyundai cars sold in Europe are also built in the region. The company may be Korean, but to all intents and purposes, this is a European car designed for European customers. It's a bigger thing than its predecessor, adding 80mm to the length and 65mm to the width. It sits 50mm lower too, helping it avoid the Noddy-car look of many citycars. The arced sill finisher on the flanks is an idea that looks to have been cribbed from Renault but works extremely well in giving the sides some shape and depth. The big front air dam looks surprisingly sporty, giving the i10 a much more dynamic look than many deliberately cutesy small cars. Inside, the i10 offers best-in-class legroom and cargo capacity. Front and rear passengers benefit from combined legroom of 1,890mm, while boot capacity has been boosted by more than 10 per cent to 252-litres with all seats in place. By contrast, a Skoda Citigo offers 251-litres, so Hyundai just squeaks in above the class benchmark.

It's sobering to think that this car is priced at just under £8,500, some 30 per cent higher than when its predecessor debuted in 2007. Your wage slip probably hasn't become 30 per cent bigger in that time and domestic car sales have contracted by about that much. Yet this is, by comparison with its rivals, a competitive price. The i10 is no longer a model judged on the amount of metal you get for your money. It's not looking to be the cheapest in its sector. This is a contender that stands toe to toe with the best in class and is priced accordingly. It's almost exactly on a par with the five-door versions of Skoda's Citigo, but this being Hyundai, the car offers a lot of standard equipment for the price point. There's a choice of three trim levels - S, SE and Premium - and at SE level, there's an extra £500 to pay if you want the 1.2-litre engine rather than the 1.0-litre unit. At entry-level, you get the basics - central locking, electric front windows, CD tuner + USB, Daytime Running Lights, ISOfix and tilt adjust steering wheel as standard. And, for another £650, you can also have air conditioning. Further up the range, the sort of features that were once the preserve of cars from a class or two above have now filtered down into the city car sector, so expect to find things like automatic climate control, a heated leather steering wheel and cruise control with speed limiter - dependent on which trim level you choose. There are also safety features which include standard-fit stability control, tyre pressure monitoring and front curtain airbags.

If you want the sub-100g/km of emissions that will bring you a free annual road tax disc, you'll have to buy your i10 in 'Blue Drive' 1.0-litre manual form with mid-range SE trim (and, for some reason, only four seat belts). That variant delivers 98g/km of CO2. Otherwise, the 66PS 1.0-litre petrol engine in standard guise puts out 108g/km of CO2. Go for the petrol 1.2 and you're looking at 114g/km of CO2 - unless you opt for the automatic version in which case the figure rises substantially to 142g/km. Fuel economy has been slightly improved over the outgoing model. Given that the old 1.2-litre car could eke better than 61 miles from a gallon of 95 RON, it's not as if you'll find this one expensive to run. A five-year unlimited mileage warranty is another big draw, especially when the Volkswagen/Skoda/SEAT triplets only offer a three year and 60,000 mile deal.