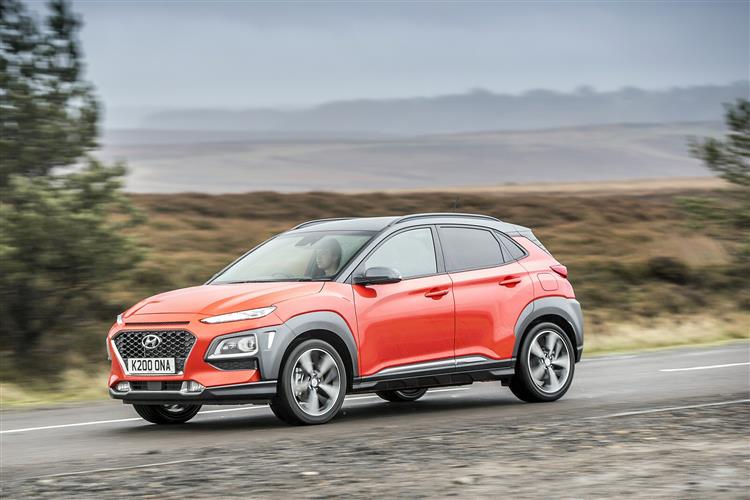 Pricing was accurate as at the 1st January 2020. New pricing has not yet been released. These prices are based on the Higher Rate Motability Component. Pricing and offers are correct at the date of publication and are subject to confirmation. Pricing may not be accurate as pricing is updated quarterly. Unless otherwise stated, metallic paint at extra cost. Library image for illustration purposes only.

Hyundai fills a conspicuous gap in its model range with this Kona, a little SUV aimed at the many supermini-based models now populating the smaller part of the quickly-growing Crossover segment. It's more extrovertly styled than you might expect a Hyundai to be and ticks all the right boxes in terms of efficiency, safety and media connectivity.

There are advantages to turning up late to any party. The 'event' in question in this case is the quickly growing market for small supermini-based SUVs, a segment that manufacturers like Nissan and Renault have been enjoying vast sales in for most of the last decade. Other volume brands were left on the back foot and it's taken them some time to catch up. That's changing now and the model we're going to look at here, Hyundai's Kona, is just one of a whole series of models seeking to make inroads in this potentially profitable segment. This contender was originally launched in the Autumn of 2017 in petrol form but more recently, hybrid variants and an all-electric version have been added to the range. It all creates a pretty complete small SUV. Let's find out why.

Kona buyers get a choice between two petrol engines. The entry-level 1.0-litre T-GDI three-cylinder turbo is borrowed from the i30 and puts out 120PS and 175Nm of torque. It's manual only, using a six-speed box, and drives through its front wheels only. The other unit on offer is a 1.6-litre four-cylinder variant with 175PS, available only with a seven-speed dual-clutch auto box and the only derivative in the Kona line-up offered with 4WD. This top petrol model can make 62mph from rest in just 7.9 seconds on the way to 127mph flat out. For the 1.0 T-GDI, the figures are 12.0s and 112mph. There are 2WD-only petrol hybrid alternatives too, using a 1.6-litre petrol unit with a 105PS power output, electrified assistance and a 7-speed dual clutch auto transmission. There's also an all-electric version, available in either a base 39kWh/135PS form or an uprated 64kWh/204PS guise. Hyundai claims a driving range of up to 300 miles. Small Crossovers in this class need to be able to offer fun, agile handling, something Hyundai says is delivered in the Kona thanks in large part to an advanced multilink rear suspension system - though this is only fitted to higher-output models. Lesser-powered versions get the kind of cheaper torsion beam rear set-up that features on less advanced rivals. There's also an 'Advanced Traction Cornering Control' package to improve traction and damping in bends.

Aware that it was late launching a model into the smallest sector of the SUV segment, Hyundai felt the need to make a bold statement with the design of this car. Hence the aggressive body styling with its two-tone roof, unusual twin headlamps and distinctive 'Cascading' front grille. Short rear overhangs and a low roofline add to the purposeful silhouette, plus contrasting exterior accents and standard-fit roof bars inject a bit of all-important SUV flavour. Inside, there's a cabin you can colour co-ordinate in a choice of different shades and lots of the switchgear is borrowed from the company's i30 family hatch. Plusher models get a floating 8-inch screen at the top of the dash. Lesser models get a 7-inch set-up. Either way, the infotainment package is compatible with the 'Apple CarPlay' and 'Android Auto' systems. A head-up display is being offered for the first time in a Hyundai and audiophiles can opt for a thumping Krell stereo system. As for practicalities, well the Kona is a little longer than a rival Nissan Juke, something that really tells in terms of back seat space. Plus there's a 361-litre boot that you can extend in size to 1,143-litres when the 60:40 split-folding rear backrest is flattened.

Hyundai knows it has to price the Kona tightly to its main rivals in the Juke and Captur-dominated small Crossover segment, so it's no surprise to find this car's pricing starting from around £17,500. That base sum will get you the entry-level 'S'-spec 1.0-litre T-GDI petrol variant. Inevitably, you have to pay a fair bit more than that to get the kind of model you're likely to see dressed up in the brochure pictures - but then that's the case elsewhere too. 'SE', 'Play', 'Premium' and 'Premium SE' trim grades provide that. A top 'Premium GT' model comes with a pokier 1.6 T-GDI unit and costs around £25,500. The Kona Hybrid prices between £22,500 and just over £27,000 and is offered in 'SE', 'Premium' or 'Premium SE' forms. The Kona electric version starts from around £25,000 after deduction of the government grant. As for equipment levels across the range, well Hyundai isn't holding back. Plusher versions get dual-zone climate control to ensure a comfortable environment for all occupants during long journeys. Plus niceties like a panoramic sunroof and a heated steering wheel are optional, as is a Navigation system you operate via an 8-inch touchscreen on the dash. Safety has been a particular feature of the development of this car. A 'Lane Keeping Assist System' is standard, as is a 'Driver Attention Alert' system, and all variants can be fitted with Autonomous Emergency Braking, a system that scans the road ahead as you drive, the set-up looking for potential collision hazards. If one is detected, you'll be warned. If you don't respond - or aren't able to - the brakes will automatically be applied to decrease the severity of any resulting accident. Other key Kona safety features include 'Smart Cruise Control', a 'Blind Spot Detector, 'Rear-Cross Traffic Alert', a 'Speed Limit Information Function' and 'High Beam Assist'.

The introduction of new engine technology has kept Hyundai right on the pace of the class best when it comes to efficiency and carbon dioxide emissions. The 1.0-litre T-GDI petrol unit puts out 121g/km of NEDC-rated CO2 and manages 45.6mpg (WLTP). And the 1.6-litre T-GDI variant delivers 158g/km and 34.0mpg. The Kona Hybrid puts out just 90g/km of CO2 (NEDC) and manages 56.5mpg (WLTP). Fuel saving technologies used with all powerplants include Integrated Stop & Go (ISG), low rolling-resistance tyres, an alternator management system (AMS) and a drag-reducing 'active air flap' in the front grille. All of this is aided by a slippery drag coefficient and in the top petrol variant, the 7DCT auto gearbox provides an improvement in fuel consumption and CO2 emissions of up to 20% compared to a conventional six-gear automated transmission. On to servicing. Your Kona will need a garage visit once a year or every 10,000 miles, whichever comes sooner. If you want to budget ahead for routine maintenance, there are various 'Hyundai Sense' packages that offer fixed-price servicing over two, three or five-year periods. You can pay for your plan monthly and add MoTs into the three or five year plans for an extra fee. As for the all-electric version, well Hyundai says it has a driving range of 'up to 300 miles'. Charging from a 7kW wallbox will take 6hrs 10 mins for the base 39kWh version and 9 hours 35 minutes for the uprated 64 kWh derivative. From a public 50kW charge point, either car can be charged to 80% capacity in 75 minutes.