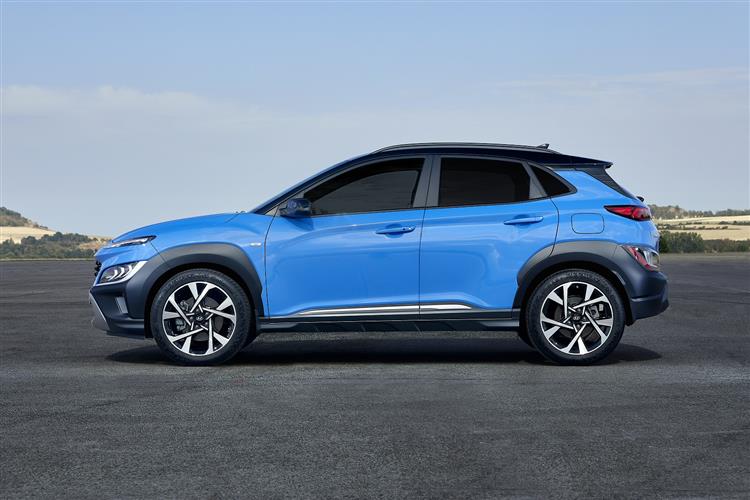 'You drive it. You define it.' That's how Hyundai wants us to view this car, their small Kona SUV, here usefully improved. If you like cars of this kind, you're probably going to like this one because it ticks all the usual boxes in terms of style and fashionability. There's more though, to this little Crossover than initially meets the eye...

Every mainstream brand you can think of is investing in SUVs these days. But delve into the detail and you'll find that some are taking this segment more seriously than others. Hyundai is a manufacturer who knows just what a difference a car of this kind can make and their Kona is a product designed precisely for the needs of buyers in the fastest-growing part of this sector - that for smaller 'B'-segment supermini-derived designs. It was first launched in 2017 and 228,000 sales were registered in its first three years on sale prior to the launch of the revised version we look at here. By the Autumn of 2020 when this updated model arrived, the Kona range had been usefully expanded with Hybrid and full-Electric variants. With mild hybrid tech also added to the mix as part of this facelift, Hyundai can now offer a wider range of powertrain options to customers than most of its rivals. And a much improved showroom propostion. Let's take a look.

The key news here is the adoption of Hyundai's latest 48-volt mild hybrid technology. This is now optional on the entry-level engine in the range, a 1.0 T-Gdi 120PS petrol unit. The 48V mild hybrid tech is now standard on the 1.6-litre 136PS 'Smartstream' diesel, which can be had in front-driven or 4WD form and either with 7DCT auto transmission or the brand's latest '6iMT' manual transmission. With the '6iMT' set-up, an electronic clutch replaces the usual mechanical linkage so that the engine can be automatically decoupled from the transmission when the driver lifts off the throttle, thereby saving fuel. A higher-powered conventional petrol engine continues to be offered, the 1.6-litre T-GDI Smartstream engine now developing 198PS. If you want a little more in terms of electrification, the Kona continues to be offered in front driven full-Hybrid form, where you get a 1.6-litre petrol unit with a 105PS power output, electrified assistance and a 7-speed dual clutch auto transmission. There's also a fully battery-powered all-electric version, available in either a base 39kWh/135PS form or an uprated 64kWh/204PS guise. Hyundai claims a driving range of up to 278 miles for the 64kWh variant. As before, advanced multi-link rear suspension only features on the top 1.6 T-Gdi and full-Electric models. Otherwise, you get the kind of cheaper torsion beam rear set-up that features on less advanced rivals, though Hyundai says it's re-tuned it in order to improve driving comfort, modifying the stabilizer bars and the rear bump stop, bringing benefits for primary ride and lateral body control. As before, there's also an 'Advanced Traction Cornering Control' package to improve traction and damping in bends.

The Kona was always quite a bold looking small SUV: well, it's even bolder now, the facelift update package adding protective cladding panels at the front, while enhanced upper daytime running lights now flank fluted inlets at the front of the bonnet. Updated alloy wheel designs feature and at the rear, the re-styled tail lights feature horizontally-stretched graphics, plus there's a smarter bumper too. As before, short rear overhangs and a low roofline add to the purposeful silhouette, plus contrasting exterior accents and standard-fit roof bars inject a bit of all-important SUV flavour. In its dimensions, this updated Kona is 40mm longer than the previous version, giving it a more sleek and dynamic look to balance out its wide, strong visual stance. Inside, the cabin gains a revised centre console and there's a higher quality feel thanks to the addition of fresh colours and materials, plus careful use of ambient lighting. An electronic handbrake switch is now standardised. The centre-dash infotainment screen is now much bigger - 10.25-inches in size - and can now be ordered optionally in AVN form with a splt-screen function and multiple Bluetooth connections, plus the brand's latest suite of 'Bluelink' telematics - and there are extra voice recognition features too. Either way, the infotainment package is of course compatible with the 'Apple CarPlay' and 'Android Auto' systems. As for practicalities, well there's space for a couple of adults in the rear to sit reasonably comfortably. Plus there's a 361-litre boot that you can extend in size to 1,143-litres when the 60:40 split-folding rear backrest is flattened.

Hyundai knows it has to price the Kona tightly to its main rivals in the Juke and Captur-dominated small Crossover segment, so it's no surprise to find this car's pricing starting from around £18,500. That base sum will get you the entry-level 'S'-spec 1.0-litre T-GDI petrol variant. Inevitably, you have to pay a fair bit more than that to get the kind of model you're likely to see dressed up in the brochure pictures - but then that's the case elsewhere too. If you really want your Kona to look the part, then you're going to want the newly added 'N Line' level of trim, which stands out through its sporty front and rear end, body colour claddings, and specific diamond-cut wheel design. If you're interested in the fully electrified models, you'll want to know that the Kona Hybrid prices from around £23,000, while the Kona Electric version starts from around £27,000 after deduction of the government grant. As for equipment levels across the range, well Hyundai isn't holding back. Plusher versions get dual-zone climate control to ensure a comfortable environment for all occupants during long journeys. Plus niceties like a panoramic sunroof and a heated steering wheel are optional, as is a Navigation system you operate via a 10.25-inch touchscreen on the dash. Safety has been a particular feature of the development of this car and freshly added features include 'SCC' 'Smart Cruise Control', 'LVDA' 'Leading Vehicle Departure Alert and 'LFA' 'Lane Following Assist'. Hyundai has also updated its 'FCA' 'Forward Collision-Avoidance Assist' autonomous braking set-up with cyclist detection. And added 'RCCA' 'Rear Cross-Trafdfic Collision-Avoidance Assist. Another unique feature to this latest Kona is Rear Seat Alert ('RSA'), which alerts the driver if someone or something is in the back seat when they go to exit the vehicle. Another safety feature primarily intended for the protection of children, Safe Exit Warning ('SEW') is intended to prevent passengers from exiting the vehicle if it is not yet safe to do so.

The introduction of 48V mild hybrid engine technology has kept Hyundai right on the pace of the class best when it comes to efficiency and carbon dioxide emissions. And it builds on a strong foundation. Let's get to the WLTP-rated figures. Even the non-electrified version of the entry-level 1.0 T-GDi petrol engine manages 45.6mpg on the combined cycle and 142g/km of CO2. For the 1.6 T-GDi, the figures are 34.0mpg and 189g/km. The Kona Hybrid 1.6 manages 56.5mpg and 114g/km of CO2. Fuel saving technologies used with all powerplants include Integrated Stop & Go (ISG), low rolling-resistance tyres, an alternator management system (AMS) and a drag-reducing 'active air flap' in the front grille. As for the all-electric version, well Hyundai says it has a driving range of 'up to 278 miles' in top 64kWh form. Charging from a 7kW wallbox will take 6hrs 10 mins for the base 39kWh version and 9 hours 35 minutes for the uprated 64 kWh derivative. From a public 50kW charge point, either car can be charged to 80% capacity in 75 minutes. On to servicing. Your Kona will need a garage visit once a year or every 10,000 miles, whichever comes sooner. If you want to budget ahead for routine maintenance, there are various 'Hyundai Sense' packages that offer fixed-price servicing over two, three or five-year periods. You can pay for your plan monthly and add MoTs into the three or five year plans for an extra fee.