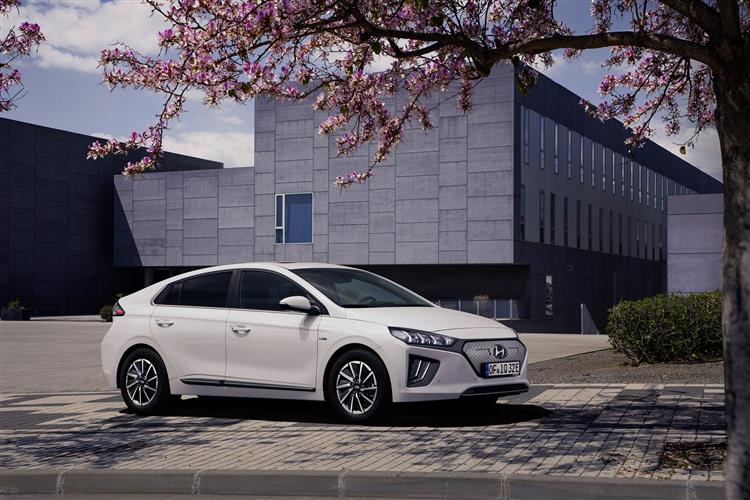 Hyundai believes that the market-leading Nissan LEAF has had its own way for far too long in the affordable part of the slowly growing full-electric car segment. They've aimed this full-Electric IONIQ model directly at that car, as well as at other more recently introduced key segment models like the Volkswagen ID.3. On paper at least, this car certainly seems to offer a package that eco-minded buyers in this class will want to consider. Especially in this revised form, where a larger 38.3 kWh battery features to extend the WLTP-rated driving range to 182 miles.

Once upon a time, Hyundai built simple, cheap, budget brand cars. Now, it makes models like this one, the IONIQ, which was the world's first vehicle to offer the choice of three electrified powertrains. We're looking here at the IONIQ Electric. It's the full-battery-powered version of a design also available in our market with Hybrid and Plug-in Hybrid power - and it's very advanced indeed, especially in this improved form. But then, maybe we should have expected that. Back in 2015, Hyundai was the very first automotive maker to launch and sell a hydrogen-powered vehicle, the ix35 Fuel Cell, and in the same year, its brand partner Kia introduced an all-electric EV version of its Soul small Crossover model, showing that the Korean conglomerate had mastered battery power too. How has it done here? Let's find out.

Hyundai's first ever stab at this market was originally launched with a 28kWh battery but now it gets a gutsier 38.3kWh battery; that's important because the driving range of this car in its original form wasn't especially competitive against some rivals. Now, WLTP-rated at 182 miles, it's bettered in the class only by the BMW i3. Inevitably, the need for a battery three times the size of the one in the IONIQ Plug-in model mated to a much larger 120PS electric motor means extra weight, the kerbside figure rising by 50kgs. In fact though, because all the bulk is mounted so low down in the car, that has a positive, rather than a negative effect on driveability, reducing the bodyroll that troubles the Hybrid models at speed through tight bends. Hyundai proudly points out that an Electric IONIQ model has a lower centre of gravity than a Volkswagen Golf GTI - which is appropriate because the frantic acceleration you initially get from rest in this variant is very hot hatch-like: the 62mph point still flashes by in a fraction under 10s. Switchable drive modes give you the choice of 'Eco', 'Normal' and 'Sport' settings. There isn't a gear lever in the full-Electric variant - of course the single-speed transmission doesn't really need one. Instead, small 'Park', 'Neutral', 'Drive' and 'Reverse' buttons are provided, along with what will initially appear to be gearchange paddles behind the steering wheel, which are actually there to allow you to vary the level of regenerative braking.

This Hyundai challenges the eco-motoring status quo in lots of ways and exterior design is another of them. On the battery-powered full-Electric variant, a front grille isn't of course needed - not for cooling anyway. We'd argue that it is required for stylistic reasons, the battery-powered version being saddled with a rather ugly blanking panel that can be ordered in a choice of grey shades or in polar white. Inside, the IONIQ Electric does without the conventional auto gearlever you'd find on the hybrid variants, instead featuring a single-speed transmission system offering small buttons for 'Park', 'Neutral', 'Drive' or 'Reverse'. This frees up space for an electronic handbrake switch - on the petrol/electric model, you're stuck with one of those clunky floor pedals. The cabin of this revised model feels of higher quality than the original version we tried back in 2017 - it's certainly a little smarter than what you get in a Prius or a Nissan LEAF. The big change here lies with the addition of this big 10.25-inch Widescreen Navigation screen, part of a media package which includes a very decent Infinity sound system, Apple CarPlay/Android Auto smartphone-mirroring and a suite of the brand's latest Bluelink connected telematics car services, these operating via a connected app. In the rear, once inside, as in, say, a Toyota Prius, headroom is at something of a premium for taller folk. Normally, these seats would have been positioned a little lower to compensate for the swept-back ceiling, but that's not possible here since they sit right on top of the powertrain's battery pack. With this Electric model, the designers had the headache of having to accommodate a much larger battery. To try and fit it in without too much of an impact on trunk space, they ditched the multi-link rear suspension set-up used on the Hybrid models and at the same time, discarded the space-saver spare wheel also provided with those variants. Ultimately though, only so much could be done: carriage capacity on fully-electrified IONIQ variants falls to 350-litres - or 455-litres if you load to the roof.

There are two trim levels offered to IONIQ Electric buyers; 'Premium', which will cost you around £32,000 after deduction of the government's £1,500 Plug-in grant; and 'Premium SE', which will cost you a around £34,000. The most obvious alternative that'll probably spring to mind here for potential buyers is Nissan's LEAF. At first glance, the LEAF does appear to be able to undercut this Hyundai by quite a bit; a mid-range LEAF with 'N-Connecta' trim would save you about £3,000 over a comparable IONIQ Electric 'Premium' model. But in standard 40kWh form, the LEAF can't be driven as far as this Hyundai when fully charged. And if you match spec exactly, you'll find that the price difference between the two cars narrows quite a bit. Arguably a closer match is the Volkswagen ID.3, which again is cheaper than this Hyundai and can deliver slightly more EV driving range. But the VW's offers slightly less rear seat space and again, wouldn't be too far off this Hyundai's price when equipped to a similar standard. Equipment highlights with base 'Premium' spec include 16-inch wheels, full-LED headlights with High beam assist, power-folding mirrors, keyless entry, a rear camera parking system with rear sensors, auto headlamps and wipers and solar glass. Inside, 'Premium' buyers also get heat for the steering wheel and front seats, a useful Wireless 'phone-charging pad, two USB ports, an auto-dimming rear view mirror and a 7-inch TFT display for the 'Driver's Supervision' instrument binnacle.

You buy a car like this expecting exemplary running cost figures and, by and large, this IONIQ doesn't disappoint. With this revised version of the full-Electric IONIQ variant, the improved 38.3kWh battery offers a potential WLTP-rated driving range of 182 miles. That looks more class-competitive: the comparable 39.2kWh version of the brand's Kona Electric model manages a range of 180 miles. In a 40kWh Nissan LEAF, it's 168 miles. So that's given you some competitor EV range perspective. If you decide that what this IONIQ Electric can offer will be sufficient for your needs, what else are you going to need to know here? Well as with any electric vehicle, the range you get will of course depend completely on how you drive the car - which is why a whole range of tools are provided to allow you to progress in a frugal manner and monitor the efficiency of your progress. Obviously, to get anywhere near the official quoted figure, you'll need to be using the most sensible of the three provided driving modes - green-tinged 'Eco', which slightly restricts throttle travel and climate system performance. You'll need to maximise brake regeneration using these steering wheel paddles. And you'll also want to keep an eye on the drive indicator to the left of the instrument binnacle screen, staying in the lower blue 'Charge' zone and out of the upper white 'Power' section. The central part of this instrument binnacle display offers a selectable 'Energy Flow' monitor and a 'Driving Style' read-out which rates your driving in % terms in 'economical', 'normal' and 'dynamic' categories. At the end of each journey, a 'Drive Info' display flashes up on the binnacle to show the miles you've covered, the miles/kW power output used and the time taken for the trip.