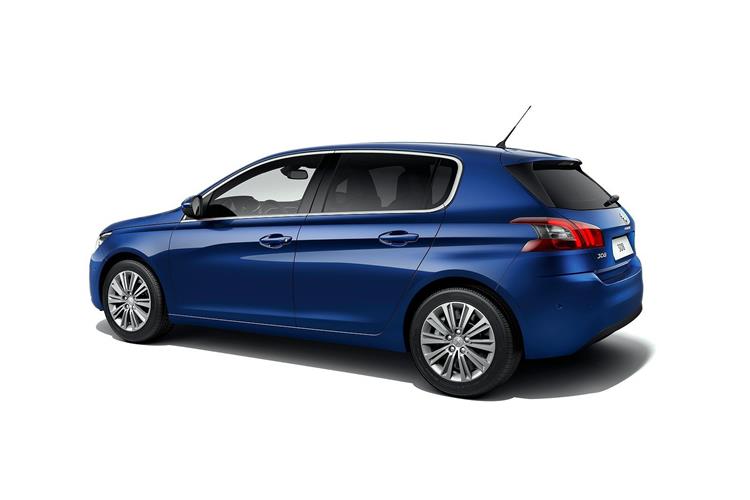 The Peugeot 308 has evolved. This revised smarter second generation model delivers a better executed family hatchback formula that offers a focus on refinement, interior quality and efficiency that puts it right up alongside the Ford and Volkswagen class leaders. It's that good, especially now that the French brand has brought its engine technology up to date. There's a level of self-confidence and, yes, desirability here that we've not seen from Peugeot in a very long time.

What do you look for in an Astra-sized family hatchback? If it's driving excitement, you'll find it in a Ford Focus. If it's sheer value, then you're more likely to be drawn towards cars like Hyundai's i30 or Kia's cee'd. But what if your priorities are a bit more relaxed? You want an expensive feel. An absorbent ride. A laid back demeanour. And a car that makes you feel you're in something much nicer. Perhaps, just perhaps, you want one of these, the revised version of Peugeot's second generation 308. Yes, we're looking at a package of facelift improvements here, but there are some genuinely significant ones, with changes to engines, transmissions and overall running cost efficiency. As before, the car runs on the PSA Group's hi-tech EMP2 ('Efficient Modular Platform 2'), underpinnings that now support a smarter, classier body. The result promises to be a car that family hatch buyers must now take very seriously indeed. Let's check it out.

It's nice to report that the changes made to this 308 are more than skin-deep. There's an all-new 1.5-litre BlueHDi 130 desel engine for example. And if you're able to stretch up to the 2.0-litre BlueHDi 180 diesel powerplant at the top of the range, you'll now find it mated to an all-new 8-speed automatic transmission. The brand says that its 1.2-litre three cylinder PureTech petrol engine has been extensively revised too, in pursuit of extra efficiency. Otherwise, it's as you were. Most will want the 1.6-litre BlueHDi unit, which comes in either 100 or 120bhp guises. There's also a 2.0-litre BlueHDi engine, offered with either 150 or 180bhp. For petrol people, the engine line-up opens with an 82bhp, 1.2-litre three-cylinder PureTech unit, then there's a choice of either 110 or 130bhp versions of this same engine further up the range. Across the line-up, transmissions are fairly standard fare, with five and six-speed manuals or a six-speed torque-converter automatic. If you want something sparkier, there's a choice of the warmed-up GT model or the full-fat GTi hot hatch. The GT variant gets the older petrol 1.6-litre THP unit in 205bhp guise or the 2.0 BlueHDi 180 diesel unit. Go for the GTi and there's a 270bhp version of the 1.6 THP petrol powerplant. Dynamically, the 308 has never really been a car for the hard charger. Instead, it's a family hatchback that's more about refinement and a relaxed gait. The suspension carries no great surprises, with a standard front strut and rear torsion beam arrangement. Peugeot has fitted rear trailing arms that allow greater longitudinal arc in the wheel travel. It sounds esoteric but it makes for a smoother ride when the rear wheels hit ridges or bumps. The electrically-assisted power steering is geared towards ease of use rather than detailed feedback but perhaps that's just as well. It makes the 308 very comfortable around town in the sort of usage it will mostly see.

This revised 308 features a sleeker bonnet that flows into a vertical grille that has a central Lion badge and the 'Peugeot' name sculpted into the upper trim. The revised elliptical headlights come with integrated daytime running light LEDs to produce a distinctive front light signature. Other design-led changes include a re-styled front bumper with three lower grille openings to ensure effective engine cooling, while the rear lamps show a smart three-claw light signature. Plusher variants all feature a large glass roof as standard. Otherwise, things are much as before, this car exhibiting a mature, confident look. It's not trying too hard. We like that. The interior retains the 'i-Cockpit' design that sees the driver looking the instruments over the top of the steering wheel. As before, there's also a 9.7-inch centre dash colour monitor incorporating 'Mirror Screen' technology which allows you to connect in your smartphone using the 'Android Auto'/'MirrorLink' or 'Apple CarPlay' systems. There's also a faster-acting navigation system with voice control that connects into the TomTom real time traffic monitoring service. Other features are as before. The contra-rotating rev counter is a neat touch, the oversized manual gear knob less so. Space all round is more than adequate and the 470-litre boot is excellent. If you need more space, there's a 308 SW estate variant with a 660-litre boot extendable to 1,660-litres with the rear bench folded.

Prices range in the £15,000 to £27,000 bracket and there's a choice between Access, Sportium, Active, Allure, Tech Edition, GT Line and GT trim levels, plus a Gti hot hatch model. The two bodystyles are a five-door hatch and a spacious SW estate. Engine options range between a choice of two different 1.6-litre BlueHDi diesels, offering either 100 or 120bhp, plus there's a 2.0-litre BlueHDi unit with either 150 or 180bhp. Petrol people choose between 82, 110 or 130bhp versions of the 1.2-litre PureTech powerplant, or a turbo 1.6 THP with either 205, 250 or 270bhp. Even the most basic models include air conditioning, remote central door locking, cruise control with speed limiter, a DAB digital radio, LED daylight running lights and Bluetooth connectivity. However, if you go for base Access trim, you don't get the infotainment touchscreen that's such a key part of his 308's much improved cabin. The minimum trim requirement for this is the 'Active' level, which starts at around £18,000. Extended driver assistance runs to eight latest-generation systems, including Active Safety Brake and Active Lane Departure Warning and adaptive cruise control, including a stop function (with automatic transmission), or a 19mph function (with manual transmission). For the utmost in parking convenience, this 308 can be ordered with the 'Visiopark 1' rear camera and a 'Park Assist' function, which measures the parking space available and automatically steers the car in and out.

So what's changed from an efficiency perspective? Well, the three-cylinder 1.2-litre PureTech petrol engine has undergone a major upgrade, with at-source and at-exhaust emission control for low real-life fuel consumption and even more efficient pollution reduction. High-precision injection control on the PureTech 130 Stop&Start unit enhances combustion efficiency: exhaust gases go through a catalytic converter then a passive-regeneration gasoline particle filter. A new six-speed manual gearbox allows owners to reap maximum benefit. Even more significant is the introduction of the brand's new 1.5-litre BlueHDi 130 S&S Diesel engine, a four-cylinder unit that also implements at-source and at-exhaust emission control. Combustion efficiency is improved by a patented combustion chamber design, the efficacy of which was amply proven under competition conditions in the 24-hour Le Mans event. Further efficiency gains are afforded by the SCR (Selective Catalytic Reduction) pollution control system, fitted as close as possible to the engine for the fastest possible post-treatment action. Let's give you some stats. The 1.6 BlueHDi variant many buyers will still choose returns 80.7mpg on the combined cycle and emits a mere 92g/km in base 100bhp form. In the 120bhp version, these stats actually improve - to 88.3mpg and 82g/km. Don't automatically opt for a diesel though, until you check out the PureTech petrol options which could make more sense for lower mileage owners. All of this is helped by this car's relatively light weight. The 1.6 diesel for example, tips the scales at 1,160kg, which to save you looking is about ten per cent less than the equivalent Volkswagen Golf.

If you're looking for a new Peugeot 308 1.5 BlueHDi 100 Active 5dr Diesel Hatchback for sale, you've come to the right place. At Vertu Toyota we don't just have the best Peugeot 308 1.5 BlueHDi 100 Active 5dr Diesel Hatchback deals, we also offer friendly advice and help with all your enquiries to ensure your buying experience is a happy experience.