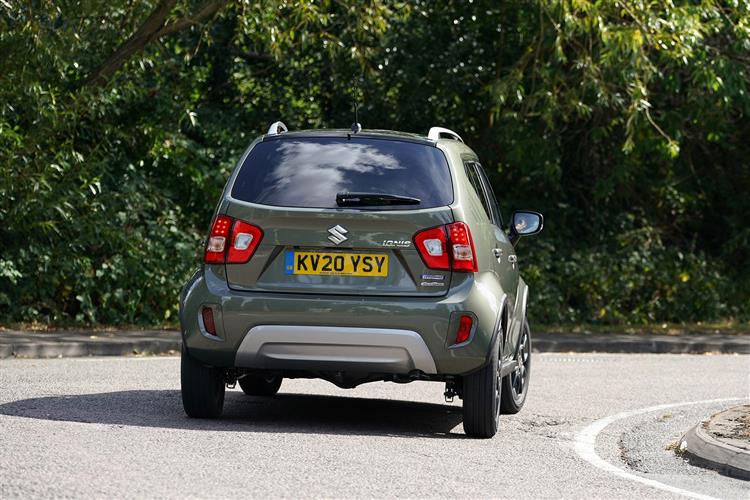 The Ignis is available in SZ3, SZ-T and SZ5 grades and the range is based around the 1.2-litre Dualjet Hybrid mild hybrid petrol powerplant. As for prices, well they start at around £14,000 for the SZ3, rise to around £16,000 for the SZ-T and run further up to around £17,000 for an SZ5 with two wheel drive. With this top trim level, there's also the option of 'ALLGRIP' 4WD for £1,000 more. Buyers get a choice of 11 colours with full personalisation options available for both exterior and interior trim. As for equipment, well six airbags, air conditioning, a DAB Radio and Bluetooth all come fitted as standard on all Ignis models. The SZ-T variant adds sliding rear seats, satellite navigation, a rear view camera, wheel arch extensions, side mouldings and roof rails and 16-inch alloy wheels. If you can stretch to the top SZ5, you'll get auto air conditioning, LED headlights with LED daytime running lights, Dual Camera Brake Support and Cruise Control. That Dual Camera Brake Support ('DCBS') system is important because with this feature fitted, the Ignis has been awarded a Five star rating Euro NCAP safety tests. DCBS incorporates stereo cameras mounted on each side of the driver's rear view mirror that function in a similar way to the human eye. The system can detect objects ahead including pedestrians and alert the driver with full braking automatically applied if necessary. Models without DCBS were awarded three stars and this system is available as an option.

The standard 1.2-litre Dualjet Hybrid engine is an efficient unit. The SHVS mild hybrid system helps Suzuki reach a top class CO2 emissions figure of 114g/km, plus achieve a fuel consumption figure of up to 55.7mpg on the WLTP combined cycle for the 2WD model. The ALLGRIP variant manages 51.9mpg and 123g/km. The SHVS set-up uses an electric starter motor - Suzuki calls it an 'ISG' or 'Integrated Starter Generator' - which assists the petrol engine in certain situations. The 'ISG' harvests kinetic energy when you brake and converts it into electrical energy that stops and starts the engine in heavy traffic and provides a mild extra power boost as you accelerate What about other costs? Well, every version comes with a three-year, 60,000-mile warranty to match most rivals. There's also a year's breakdown cover that extends across the whole of Europe and includes roadside recovery. A 12-year anti-rust guarantee comes with the car too. Service stops are needed every year or 12,500 miles for the 1.2-litre SHVS variant. Once your Ignis has been registered for three years, it will become eligible for Suzuki's fixed price service package which will enable you to get servicing carried out for a single fixed price that will include parts, labour and VAT. There are around 180 Suzuki dealers in the UK and they're noted for excellent customer service. You can also even out the cost of regular maintenance with a 'Service Payment Plan' that covers you for anything between one and three garage visits.