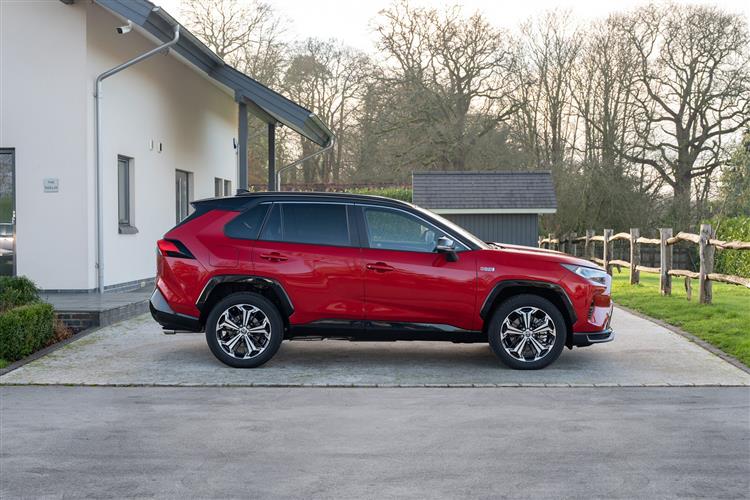 The first plug-in hybrid version of Toyota's RAV4 draws on more than twenty years of the brand's leadership in hybrid powertrain technology to offer customers a 'D'-segment SUV that promises to be not only more powerful than any other in its class but also more efficient in terms of emissions and fuel consumption. There's quite a price to pay for this technology but the stats look tempting - a total output of 302bhp, an all-electric driving range of 46 miles and a CO2 reading of 22g/km.

It's strange that Toyota was one of the last SUV makers to adopt plug-in technology. Primarily because it was the very first brand to introduce plug-in tech of any kind to the market - with the Prius Plug-in of 2012. A second generation of that car was subsequently introduced five years later and we expected to see its technology quickly spread to other Toyota models. This hasn't happened as quickly as expected but at the end of 2019, the brand announced that the fifth generation version of its RAV4, an SUV it originally said needed only self-charging hybrid power, would gain the plug-in variant we're going to look at here. By that time, the mid-sized SUV market was already well populated with PHEV models following a lead set by Mitsubishi's plug-in Outlander. Brands like Peugeot, Citroen, Vauxhall, Ford and SEAT have all piled into this part of the segment, alongside premium makers like BMW, Audi, DS, Mercedes and Volvo. Even though the MK5 model RAV4 initially sold well for Toyota in its self-charging hybrid form, attracting more than 120,000 customer orders in Western Europe in its first year on sale, it was clear that it would also need a plug-in variant to properly compete.

With 302 braked horses-worth of combined system output on tap, this plug-in variant offers quite a big step up in power from the standard self-charging RAV4 Hybrid, which offers 215bhp in front-driven form or 219bhp in four-wheel-drive guise. This PHEV variant only comes in 4x4 form and its power increase comes courtesy of a more powerful electric motor paired to a larger high-capacity underfloor lithium-ion battery, with the powertrain featuring a boost converter on the hybrid's power control unit. The 62mph sprint time from rest is claimed to be just 6.0s and this model can run at speeds of up to 84mph with no intervention from the engine. When the limit of EV driving range is reached, the car will automatically switch to its hybrid vehicle (HV) mode. The choice of driving modes means the driver can use HV mode to start their journey, then switch to EV mode to maximise efficiency, for example when reaching an urban area. In Auto EV/HV mode, the hybrid system will automatically come into play when extra power is needed, for example under sharp, sudden acceleration, then returning to EV mode immediately afterwards. You'll want to know a bit more about the engine. It's the same 2.5-litre Atkinson cycle hybrid petrol unit used in the conventional RAV4. Toyota's electric all-wheel-drive system is also carried over without change, a set-up which sees the combustion engine and a front electric motor powering the front axle and an additional rear-mounted electric motor driving the rear axle. Both motors incorporate regenerative charging to charge the battery, the extent of which can be controlled by the driver via a pair of paddle shifters behind the steering wheel. When fully charged, that battery can take the car to a WLTP-rated 46 mile driving range.

As with most plug-in models in this segment, visual differentiation points from the conventional model are few; a bit of bespoke badgework, an extra filler flap for the charging socket and that's about it. Otherwise, this variant is like any other upper-spec MK5 model RAV4, which means that it's styled with a tad more character than previous generation versions of this car. This is a 'D'-segment SUV, which means that it's a size above a Qashqai or a Sportage, with pavement presence closer to, say, a Honda CR-V or even an Audi Q5. Piercing narrow full-LED headlamps and slim nostrils above the polygon-shaped front grille deliver a bit of overtaking presence. And in profile, you notice the Jeep-like squared-off wheel arches and the adoption of larger wheels that here can be up to 19-inches in size. Inside, it's also standard RAV4 fare, though this Plug-in version is the first derivative in the range to add in two features that'll be rolled out to conventional variants - a colour Head-up display and 'Apple CarPlay'/'Android Auto' smartphone-mirroring, the latter featuring on an 8-inch centre dash screen. The instrument binnacle features Toyota's usual Hybrid system indicator on the left - with its normal 'Charge', 'ECO' and 'Power' sections. And in the back? Well the rear bench doesn't slide, but the backrest reclines for greater comfort on longer journeys and headroom's good too, despite the low-ish roof line. There are some boot area compromises with the plug-in tech though, cargo capacity falling from the usual 580-litre figure to 520-litres here.

There are two variants on offer, starting with the 'Design'-trimmed model priced at around £43,000. Around £1,000 more gets you mid-range 'Dynamic' trim. And around £47,500 more gets you top 'Dynamic Premium' spec. Obvious rivals include plug-in versions of the Peugeot 3008, the Citroen C5 Aircross, the Vauxhall Grandland X, the SEAT Tarraco and the Ford Kuga. A top-spec RAV4 Plug-in Hybrid may also appeal to a customer looking at a premium-brand SUV of this kind, plug-in versions of the Volvo XC40, the BMW X3, the Audi Q5, the Mercedes GLC and the DS 7 Crossback. Opt to spend your money Toyota's way and you'll find plenty of kit included. The mid-range RAV4 Plug-in 'Dynamic' model for instance, offers 19-inch machined-face alloy wheels, a nine-inch multimedia touchscreen, access to connected services, heated front and rear seats and LED projector headlights. To support its EV capability, it will come with a 6.6kW (32A) cable for fast charging (wall box system required). The 'Dynamic Premium' version adds features including black leather upholstery, front seats with ventilation and memory settings, a panoramic roof, a head-up display and a JBL Premium Sound System. There's also plenty of camera safety kit, including a pre-collision set-up with pedestrian detection, lane departure warning with steering assist, automatic high beam, road sign assist and automatic adaptive cruise control. Other advanced safety features include a Blind Spot Monitor and Rear Cross Traffic Alert for safe manoeuvring. Plus an E-Call service that can automatically alert the emergency services to the vehicle's location in the event of an accident - triggered when the airbags are deployed.

Toyota wanted to improve on the class standard with this RAV4 Plug-in Hybrid and, sure enough, its WLTP-quoted CO2 emission figure of 22g/km is fractionally better than most of its competitors, which of course will mean an attractively low BiK taxation figure (6%). Like most rivals, the brand also quotes a 3-figure combined cycle fuel consumption reading (282.5mpg) but as usual in plug-in territory, this isn't ever likely to be replicated by the average owner. As a feather-foot, we suppose 80-90mpg might theoretically be possible but your realistic average is going to be much less than that - and certainly less than you'd get from an equivalent diesel model. Rely on the petrol engine alone and you'd struggle to average 35mpg. We've already given you the WLTP driving range (46 miles); as usual with this type of car, around 25 miles is more realistic. Charging takes around two and a half hours using a 230V/32A connection. The charging process can now be programmed for a week on a day-to-day basis, including the facility to simultaneously charge the battery and pre-heat or pre-cool the cabin. What else? Well, the five year 100,000 mile warranty is extremely good and even after that runs out, you'll find that most spares are relatively inexpensive. There's also three years warranty against rust and 12 years of anti-corrosion protection.