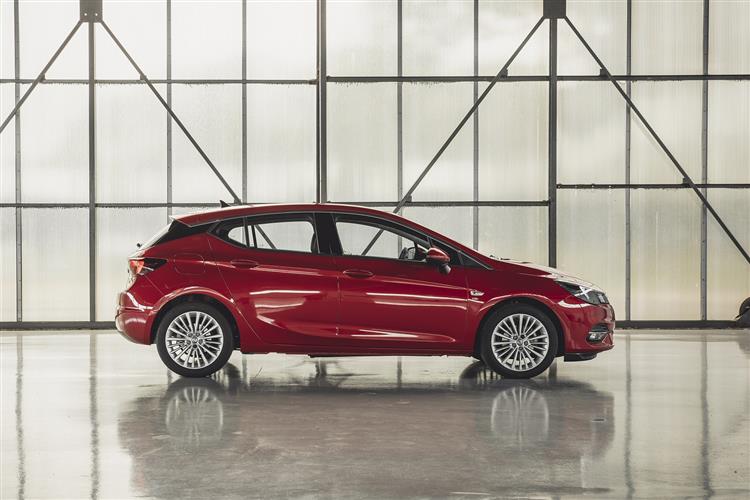 There wasn't much wrong with Vauxhall's seventh generation 'K'-series Astra that a few good engines wouldn't have sorted out. These have been added as part of the updates made here, delivering efficiency gains that might cause careful family hatchback buyers to see this car in a whole new light. The hatch and Sports Tourer variants on offer both get extra technology too. Think you know the Astra? Maybe it's time to take another look. Here, we try the 1.5 Turbo D version.

According to Vauxhall, over a quarter of all British drivers have at some point either owned or driven an example of their Astra family hatch in the forty years this model line has been on sale. A pretty significant car for our market then - and it still is, hence the importance of the changes made to this seventh generation model, improvements the brand hopes will rejuvenate its appeal. We always recommended this design highly as an all-round driver's car and - if priced rightly - as a complete family hatchback package. Plus, for what it's worth, it's still made in this country - the only Vauxhall apart from the Vivaro van that now is - though it looks as if that might change in future. For the time being though, the Astra wears its British badge proudly and wants to convince you that the 3 million UK sales this model line's racked up since 1979 undergird a product with a depth of development that rivals can't match. It's certainly an under-rated car. But is it one you should consider buying? Let's find out at the wheel of the Turbo D diesel version.

We'd forgotten how good the Astra is to drive; if you happen to be familiar with the original version of this 'K'-series seventh generation model, you might not have. Relatively light weight and a clever Watts linkage suspension system made the handling of that car beautifully balanced, something further enhanced by the dynamic improvements made to this revised model - revised spring and damper rates that improve the ride over poor surfaces and fresh calibration for the steering which improves body control at higher speeds. The lighter three cylinder engines now fitted here also help in this regard. Here, we opted to try the diesel, which is 1.5-litres in size and offers choice of either 105PS or, as in the case of the car we sampled, 122PS outputs. Choose the gutsier engine and you'll be offered the option of Vauxhall's first 9-speed auto gearbox, a torque converter unit that shifts smoothly but isn't especially eager to kick down. At which point you notice this diesel's rather vocal character - something also evident when the car's idling. Don't get us wrong; in refinement terms, it's a useful improvement over the old 1.6-litre CDTi unit and there are really no significant issues at cruising speeds, aided by this revised design's aerodynamic improvements. Overall though, rival diesels in this class still feel a little more hushed.

Mid-term facelifts are usually all style over substance. Here, it's the other way round - which is good, but ideally the Astra needed both if it was to reassert its position towards the head of the family hatchback segment. As before, there's a choice of two body styles, this five-door hatch or an alternative 'Sports Tourer' estate. You'd need to be a sales person or a fanatically loyal Astra owner to notice the visual changes made, which are only really evident at the front. The twin chrome lines that previously flanked the central brand badge on the grille have been replaced by a single silver strip here. At the wheel, as before, the characteristic fascia element is what Vauxhall refers to as a 'blade'-style panel that stretches right across a cabin that remains ergonomic, quite nicely finished and, on a plusher variant, relatively smart. Infotainment's taken care of by a centre-dash screen of either 7 or 8-inches in size. Go for the 'Multimedia Navi Pro' package that gets you this bigger monitor and you also get a further 8-inch screen to replace the two conventional analogue dials you'd otherwise view through the three-spoke steering wheel. In the back seat, it's actually a lot more spacious than the exterior dimensions and the outward styling lead you to expect. There's almost as much space for your knees as you'd find in a Skoda Octavia, the family hatch class leader in this regard. Out back, there's a 370-litre boot - or 540-litres in the Sports Tourer estate.

Vauxhall is keen to point out that list pricing hasn't changed much, despite the more sophisticated engine technology and higher levels of equipment. From the launch of this revised model, that meant figures kicking off from around £20,000 for the Turbo D models and rising to around £30,000 at the top of the range. If you want the Sports Tourer estate variant rather than the five-door hatch, then you'll need to budget for an extra premium of around £1,500. The core trim levels - base 'SE', 'Business Edition Nav' and 'SRi Nav' - apply both to the five-door hatch and to the Sports Tourer body style. This hatch also adds some extra spec level options - two for mid-range buyers (a straight 'SRi' version without navigation and a better equipped 'SRi VX Line' model); and two for the top of the range - the plush 'Elite Nav' spec and top luxurious 'Ultimate Nav' trim. Most models get Connected Navigation services with real-time traffic information, a set-up that uses online map updates to make the journey more relaxed, while the navigation display itself appears with redesigned symbols in a fresher, more modern look. The same applies to the instrument cluster, which features a redesigned digital speedometer. Optionally available is the E-Call emergency call function. If needed, help is just seconds away by pressing the red button. If the seatbelt tensioners or airbags are deployed, the system automatically makes an emergency call.

The 1.5-litre three cylinder diesel unit benefits from a particularly sophisticated emissions reductions system consisting of a passive oxidation catalyst, an AdBlue injector, an SCR catalyst and a Diesel Particulate Filter. For this test, we chose the 122PS version of this unit, which with manual transmission manages a WLTP-rated combined cycle fuel reading of up to 64.2mpg and 92g/km of NEDC-rated CO2 with either body style. Choose the 9-speed auto gearbox you can have with the diesel hatch variant and the figures fall quite a lot - right down to 56.5mpg and 109g/km. With the lower-powered 105PS version of this diesel, the straight fuel and emissions stats don't look that much different from those of the higher-powered unit - they're rated at up to 65.7mpg and 90g/km with either body style. More significant is the news that in all its forms, this 1.5-litre Turbo D powerplant is 'RDE2'-compliant, that jargon meaning that unlike most competitor diesels, it will meet all emissions regulations for the foreseeable future. As a result, also unlike most competitor units, it's not liable for the usual 4% BiK diesel surcharge that a company user would normally have to pay. It all adds up to a saving over the pre-facelifted model's old 1.6-litre CDTi engine that over a four year / 80,000 mile ownership period Vauxhall believes would add up to around £1,000. And over the same timeframe, the company reckons that running this diesel Astra could save you as much as £1,800 over the cost of operating a comparable 1.5 EcoBlue-engined diesel Ford Focus.