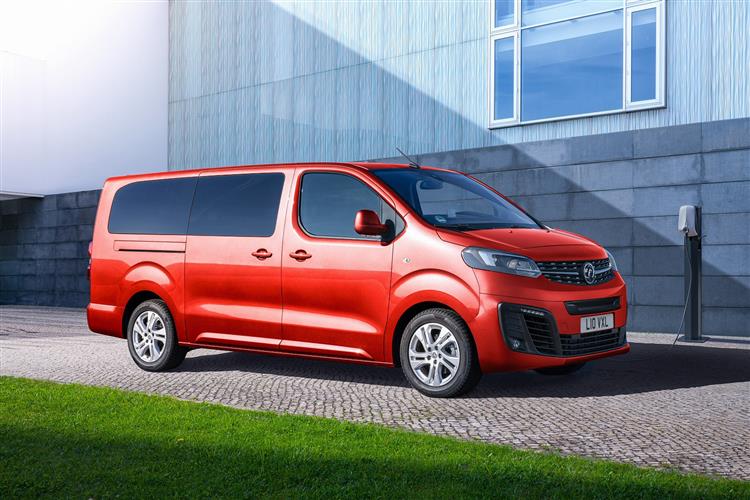 Need a really large MPV? Perhaps you need a full-electric one? Here's Vauxhall's take on this concept, the Vivaro e-Life. In 50kWh form, it won't go particularly far on a single charge, but it'll seat up to nine in the base-trimmed variants which substantially undercut anything that the Peugeot and Citroen versions of this design can offer on price. As with those models, this one will function as anything from an executive minibus to a van to help you move house. All without using a drop of fuel.

Vauxhall continues to borrow EV technology from its Peugeot and Citroen Stellantis Group cousins. Here, this company big Vivaro Life has benefitted, allowing the Griffin brand to offer this Vivaro-e Life full-battery-powered People Carrier. Like the combustion-engined Vivaro Life models, this one's based on Vauxhall's Vivaro van and it goes up against two identically-engineered design stablemates, the Peugeot e-Traveller and the Citroen e-Space Tourer Neither of this trio can approach the driving range of the segment leader, the V-Class-based Mercedes EQV, but this Vauxhall costs a lot less than that Stuttgart model and offers a Long body shape with plenty of cabin space and room for up to nine. Which might be of interest to a suburban family customer not especially concerned about extended driving range. Let's check this green-minded MPV out.

Big People Carriers are largely used for suburban duties, which is just as well because this car's not much good for anything else. A huge heavy People Carrier relying on a battery designed to sustain an electric supermini (the Corsa-e) was never going to travel very far between charges and, sure enough, this e-Traveller's 50kWh battery pack takes this Vauxhall only 143 miles between charges. So you're going to need to think hard if you're going anywhere more than 60 miles or so away, unless you've the time for a potentially lengthy recharging stop before your return journey. This is annoying because the electric version of this car's LCV counterpart, the Vivaro van, has the option of a larger 75kWh battery that would add around 60 miles of additional range. At the time of this test in Spring 2021, that wasn't being offered on the Vivaro-e Life. If you're wondering what driving a huge great full-electric People Carrier might be like, well, there's not too much to get your head around. You turn the key in the ignition, wait for the starting beep, then flick the gear toggle into Drive. There's a drive-mode selector that allows drivers to switch between ECO, NORMAL and POWER modes. There's 136hp on tap and there's also a 'B' option that ploughs extra energy back into the battery, offering more resistance while you're slowing down. Top speed is just 84mph.

Apart from the badge work and the charging flap, it'll be difficult for your neighbours to spot that you've switched your big MPV to full-electric power. This big Vauxhall is clearly van-derived, but the looks are modern and not too LCV-like. Like its identically-engineered Citroen e-SpaceTourer cousin (but unlike its other clone, the Peugeot e-Traveller), this Vivaro-e Life can be had in 9-seat form - that's with base 'Edition' or 'Combi' trim. This means you get bench seats in all three rows. The top Vivaro-e Life 'Elite' only has a bench seat in the second row, so seats up to seven. Unlike a Peugeot e-Traveller, there's no choice of body lengths, this Vauxhall coming only in big 5.30-metre 'Long' form. At the wheel, there's a driver selector toggle where the gear lever would normally be and you get a power flow gauge instead of a rev counter in the instrument binnacle. The battery installation hasn't compromised passenger or cargo space in any way. All the rear seats can be removed to reveal a van-like cargo area, but they've heavy and awkward to lift and you'd need a big garage to store them in. The top 'Elite' version has an opening rear tailgate glass panel.

The Vivaro-e Life comes only in the lengthiest 'Long' body shape and in its most affordable forms can be had in 'Edition' or 'Combi' trim, both variants costing under £35,000, which means they qualify for the government's Plug-in car Grant, reducing the asking price to around £32,500. Both these base variants can seat up to nine people. The equivalent Peugeot e-Traveller Long version of this design doesn't offer a base-trimmed model to match that starting price; and the equivalent Citroen e-Space Tourer can't be had with this Vauxhall's Long body shape. At the top of the Vivaro-e Life range, there's a plush 'Elite' trim level (around £50,000) which can seat up to seven. 'Edition' and 'Combi' models get only the basics; 16-inch steel wheels, air conditioning and cruise control with a speed limiter. There's a DAB radio with Bluetooth and steering wheel controls. The top 'Elite' version is of course much better appointed. Here, you get larger 17-inch bi-colour alloy wheels, dual-zone electronic climate control with roof-mounted heater controls. There's also front fog lights, a rear view camera and a tailgate with a separate opening rear window. Plus leather upholstery, a head-up display and a chrome grille. There's also a 7-inch centre-dash infotainment screen with 3D navigation, along with Apple CarPlay and Android Auto smartphone applications. Electronic driving assistance devices include a 'driving time warning system', 'Driver Attention Alert', a 'Road sign reading with speed limit recommendation system' and an 'Active Safety Brake' set-up. All versions offer plenty of seating modularity and flexibility, with the second and third row seats fully adjustable and removable.

Using 100kW of direct current (DC), it takes around only 30 minutes for the 50kWh battery to reach 80 per cent state-of-charge. Vauxhall offers on-board chargers that ensure time spent plugged-in is as short as possible and that the battery (covered by an eight-year/100,000 mile warranty) has a long life. The Vivaro-e Life features a single-phase 7.4kW on-board charger as standard, with a three-phase 11kW on-board charger available as an option. In order to make usage even more practical, "Vauxhall Connect", the "myVauxhall" app and "Free2Move Services" - the mobility brand of Groupe PSA - offer special solutions for all Vauxhall electric vehicles, including the Vivaro-e Life. The services are accessible via apps. The "Charge My Car" function from the "Free2Move Services" app enables access to more than 140,000 charging points throughout Europe, including payment. To make it even easier for customers to choose the right charging point, the "Free2Move Services" app makes a preselection based on the distance to the charging point, the charging speed and the current charging price of the possible public charging options. With the "Vauxhall Connect" e-remote control functions, customers can use their smartphones to check the battery's state-of-charge or programme air conditioning and charging times. In addition, the "Vauxhall Connect" portfolio ranges from eCall and breakdown calls to numerous other services, such as vehicle status and information. LIVE Navigation provides online traffic information in real time.