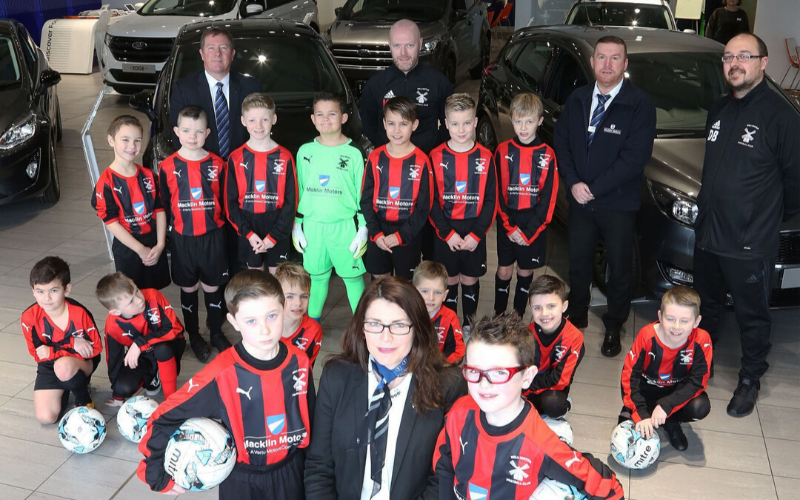 Hamilton Ford and Mazda are continuing their support of a local boy’s football team in a third sponsorship with the club.

The dealerships will support Mill United FC’s 2009’s for the next 18 months, and have covered the cost of the team’s new kit and will also sponsor a ‘Player of the Year’ award.

Mill United FC was formed in 1977 by friends John Moxen, who lived at Mill Court and George Hanley, who lived at Mill Park, to create an organisation for young boys who love football. Over the years, the club has won more than 25 Scottish cups and numerous league and cup competitions, both in Scotland and abroad.

This is the third time Macklin Motors has worked with Mill United FC. Supporting local teams and community projects is part of Macklin Motors parent group, Vertu Motors plc’s, ongoing commitment to work with a wide variety of community organisations.

Frank Fleming, franchise manager at Macklin Motors Hamilton Ford and Mazda said: “We were more than happy to continue our relationship with Mill United FC by supporting the 2009’s. The club has a fantastic reputation in our local area, of nurturing future football stars, and we are proud to have our logo emblazoned on the team’s strip.

“It is so important to get involved with community initiatives, and we are looking forward to tracking the team’s progress and cheering from the side lines in the upcoming season.”

David Blakemore, Mill United 2009 Team Secretary said: “It’s great to see a well-respected, local business such as Macklin Motors helping out a local boys football team. We really appreciate the support, as it has enabled us to purchase a new set of strips which the boys will wear with pride.