Reserve this car online for just £99 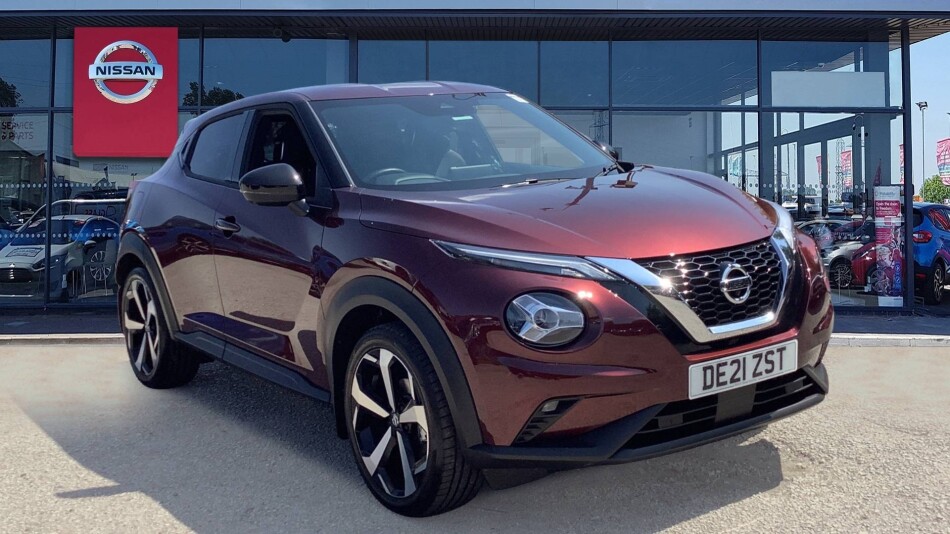 Please select one of the options to continue.

Back to results Show similiar vehicles
Reserve for £99

Buy this car online from the comfort of your own home. Add a part exchange and free delivery. With a 14 day money back guarantee.

"The original Nissan Juke was an absolute trailblazer. Designed as an alternative to conventional small cars, its high-riding stance put a touch of SUV style and glamour within the grasp of buyers on more modest budgets. Its quirky looks were not to everyone's tastes, but Nissan sold Jukes by the bucketload while inspiring a raft of other small, high-riding cars in the process, including the Ford Puma, Renault Captur, Skoda Kamiq and Volkswagen T-Roc. The trouble was, even if you loved the way the original Juke looked, there weren't many logical reasons for actually buying one. Thankfully, this second-generation version has all the ingredients needed for it to be a vastly better all-rounder. Under the skin, it's now based on the Renault Clio hatchback, so it should feel more nimble in the bends. It also benefits from a thoroughly modern 1.0-litre turbocharged petrol three-cylinder engine (Nissan has ditched diesel power entirely for the Juke). While it still trades on its looks, which are distinctive and instantly recognisable, it has slightly more grown-up styling than its predecessor. The original design cues, such as the upside-down headlights and hidden rear door handles, have been integrated neatly into a more cohesive-looking silhouette. You could almost call it handsome - but we'll leave that up to you. The only engine option in the Nissan Juke at the moment is the 112bhp 1.0-litre turbocharged petrol (badged DIG-T 114), which is gutsy enough as long as you keep the revs above 2000rpm. If you work it really hard, it can take the Juke from 0-62mph in 10.7sec. Despite its lofty stance, the Nissan Juke doesn't sway around through tight twists and turns as much as you might imagine, and there's a reasonable amount of grip. All versions of the Nissan Juke get LED headlights, and the view forwards and diagonally out of junctions is quite good. That's partly because you're perched relatively high up, but also because the windscreen pillars are helpfully slender. In terms of overall interior quality - this is one area where the latest Nissan Juke has taken an enormous leap forwards compared with the original model. True, it's the range-topping trims like Tekna+, with fancier materials such as swathes of Alcantara and glossy black plastic, that look the best, but even the mid-level trims look and feel better than a Volkswagen T-Roc or Ford Puma inside. There's a good deal of leg room in the back of the Nissan Juke, and even six-footers won't have to suffer their knees digging into the seat in front. Overall Nissan have done an excellent job on the new generation Juke. It looks the business, it's packed with lots of great features and it drives excellently too. Have a drive, we know you'll like it!"

The specification listed for this vehicle was standard when purchased new. The actual specification may vary, for confirmation, please contact our sales department.

Terms & Conditions: Every effort has been made to ensure the accuracy of the information shown. However, errors do sometimes occur. The detailed specification of each vehicle listed on the Macklin Motors website is provided by "CAP". The inclusion of such data does not imply any endorsement of any of its content nor any representation as to its accuracy. *Home delivery on used cars is free if you live under 30 miles from the Macklin Motors dealership where the vehicle is purchased. Any subsequent delivery cost is calculated at an additional £1 per mile over and above 30 miles.

We are currently unable to provide part exchange valuations online.

Speak to an advisor

My Car is the ideal place to buy a car online, get a valuation and save listings you are interested in.

My Car is the ideal place to buy a car online, get a valuation and save listings you are interested in.