Nissan has reached the 500 vehicle mark with its range of electric taxis, having sold more than 550 taxis in Europe.
Macklin Motors

Nissan has reached the 500 vehicle mark with its range of electric taxis, having sold more than 550 taxis in Europe.

What is particularly encouraging is the reliability and versatility of Nissan's electric vehicles, given the strenuous tasks they are consigned to as taxis.

During 2015 alone, over 100 electric vehicles were delivered to taxi companies across Europe, making Nissan the best-selling manufacturer of 100 per cent electric taxis. The growth of the electric car market looks set to continue, as its popularity begins to take hold in Eastern Europe. Green Lite Taxi Kft, based in Budapest, has purchased 65 Nissan LEAFs in a bid to become Hungary's largest zero emissions fleet.

Ors Levay, Green Lite Taxi Kft CEO, said: "We are delighted to be the first taxi company in Hungary to go 100 per cent electric and the 199 km range means we only need to charge our taxis once during a shift. Along with the large savings on fuel and maintenance, the Nissan LEAF is very smooth to drive and almost silent, which means a more enjoyable journey for my customers and the drivers say typical 10 hour shifts are less tiresome."

In Estonia, it has been reported that a Nissan LEAF owned by taxi firm, Elektritakso, has completed over 135,459 miles on its original battery pack, demonstrating the high quality and reliability of Nissan's electric vehicle range.

Gareth Dunsmore, Director of Electric Vehicles for Nissan Europe, said: "We are so proud to be announcing this all-important milestone. Nissan has already delivered 30 per cent more e-taxis this year than in 2014 and this figure is constantly increasing, as more taxi companies realise the benefits of becoming 100 per cent electric." 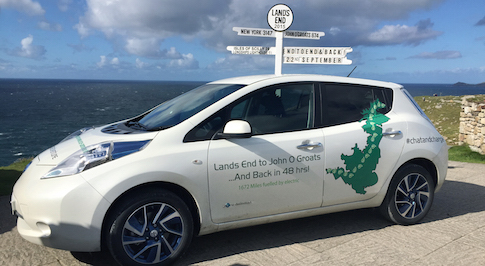